Advice for top marks on your grade:
1. Check spelling, punctuation, grammar, use AP STYLE.
2. Have at LEAST 1 original interview to add value to story.
3. Attribute correctly. Every piece of information should be attributed to the source of that information.
4. Content and story hard news value.
5. Usage of inverted pyramid.
6. Strong headline and powerful lede.
7. Use the “Writing” chapter in the textbook as a guide.

What is the AP Style?

Why do we use it?

(Every Newsroom has their own style and standards… but AP Style is the industry baseline.) 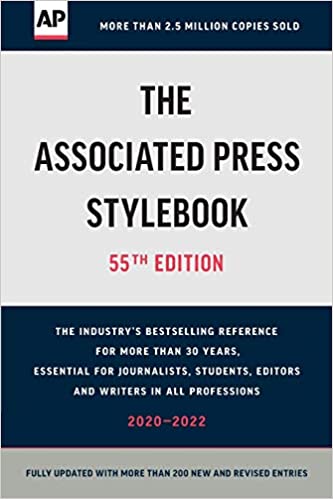 Why do we, as adults, care about spelling, grammar, punctuation, and style standards?

Importance to journalists: Uniformity and consistency in reporting.

Importance in sports: “…let’s also not be naive: understanding key terms and their proper spelling remains essential for all who seek to become a professional in any sports media field.” – Sportswriter Tommy Deas

Importance in PR and Marketing: “we’re all seeking positive news coverage to help tell our story and generate increased name recognition, it makes sense to use every possible tool to achieve that goal. Learning more about AP style could mean the difference between the media reading your press releases or tossing them in the garbage.” – Public Relations Expert Lisa Goldsberry

AN EXAMPLE OF THE BASICS:

“The word coronavirus refers to a family of viruses, but in AP style writing it’s okay for writers to use the term to specifically refer to the virus causing the current pandemic. Although this incorrectly implies the present coronavirus is the only one, readers will understand your intended meaning.

The term COVID-19 refers to the illness caused by the coronavirus and should be used in that context. For example, you could say ‘coronavirus spreads through the air, and my cousin is recovering from COVID-19.’

Always capitalize all letters in COVID-19.”

Words added to the Stylebook and how to write them: “Indigenous; brown; people of color; BIPOC; slaves, enslaved people; Black Lives Matter; Juneteenth”

“The term Black should be capitalized when used in a racial, ethnic, or cultural context. The Associated Press says it made this update because many people who identify as Black share a sense of history, identity and community and have a shared experience of being discriminated against because of skin color.

AP’s style is to use a lowercase “w” when writing the term white in a racial sense. The Associated Press writes that it is because white people are not systemically discriminated against due to skin color and don’t share the same history and culture globally.”

“Although the acronym AAPI is widely used within Asian American and Pacific Islander communities, the Associated Press says writers should still spell out the entire term, only using the acronym in direct quotes.”

+It’s best to ask people with disabilities how they prefer to be described. (“woman who is deaf” vs. “deaf woman”)

+Avoid the terms handicap and handicapped when referring to a disability or a person.

+Avoid using disability-related words. For example, don’t refer to a situation as psychotic, a plan as moronic, or use the expression “she turned a blind eye.” 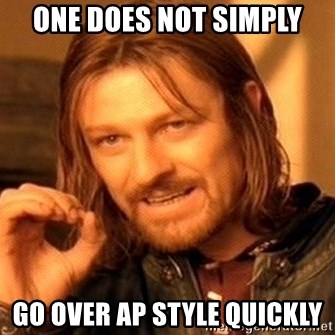 The covid-19 pandemic had a disproportionate affect on black communities as compared with white communities.

(The styles to memorize…)

A job title is only capitalized if it comes before a name, and only if it’s a formal job title (as opposed to a job description):

Numbers are written out if less than 10, and numerals if 10 or more.

Ages have their own rules? Always use numerals, adding hyphens for ages expressed as adjectives before a noun or as substitutes for a noun.

Use between when talking about two items, among when referencing more than two.

Because denotes a specific cause and effect. Since is used casually when the first event in a sequence led logically to the second but was not its direct cause.

Lowercase words like north, west, northeast, etc. when giving directions, but capitalize them when describing a region.

Used to mean one or the other, not both. 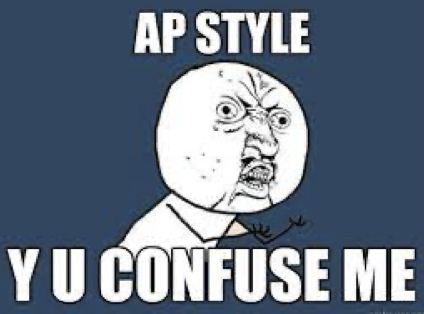 OTHER BASICS IN AP STYLE (and EVERYWHERE ELSE)

I accept the invitation.

Everyone’s invited except me.

However, affect means to influence, while effectmeans to cause. Effect as a noun means result.

This affects the outcome.

What is the effect of this outcome?

Farther describes physical distance. Further refers to an extension of time or degree. 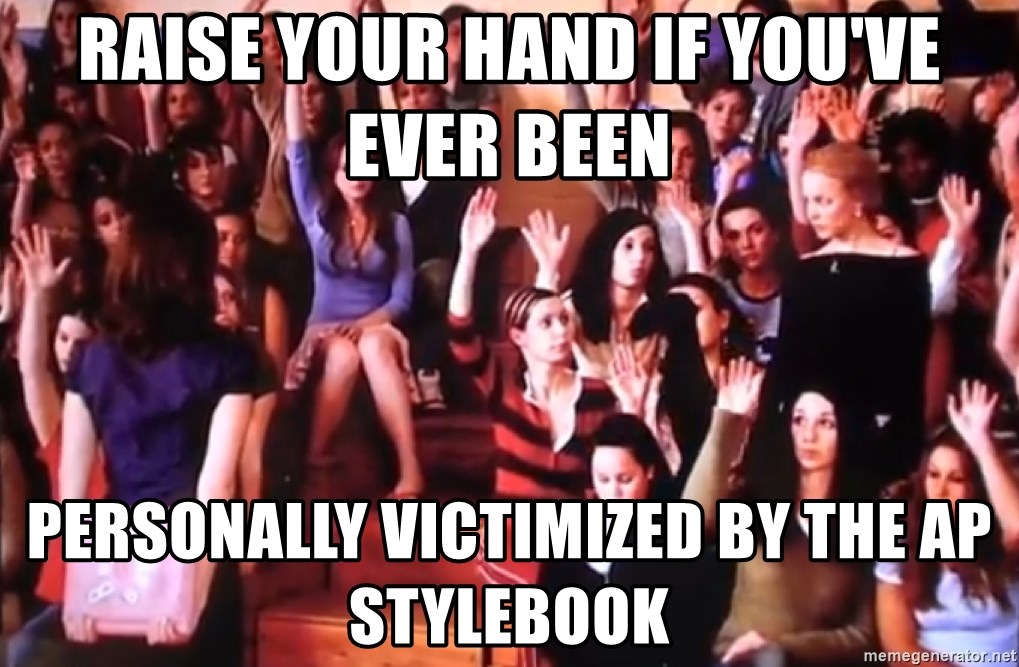 Here are some common style issues in sports …

Do not capitalize names of sports, their competitive level (varsity, junior varsity, etc.) or specific positions

When referring to a gender-specific sport, do not use apostrophe.

Use numerals for records and scores but not necessarily points.

The team was No. 1 (NOT number one); No. 1 Garfield beat No. 6 Roosevelt; first-place team

When referring to the team, it should be singular. If you are talking about several players, it should be freshmen. The freshman football team was undefeated. Six varsity players are freshmen.

Halftime, not half time or half-time

Playoff is a noun. Play off is a verb.
.

Always lowercase spring, summer, fall and winter unless they are part of a title.

That and which are used to refer to inanimate objects and animals without a name. That is used for essential clauses that are necessary for the sentence to have meaning, while which is for nonessential clauses. Which clauses are ALWAYS surrounded by commas. If you can drop the clause without losing the meaning of the sentence, use which and put it in commas.

Myriad is not followed by of. The myriad books on the shelf are overwhelming. She has myriad shoes in her closet.

There’s plenty more… That’s why you have a book as a reference!

IN TEAMS – Fix this report:

A group of nine year old children, that were playing soccer in a field behind there school, say they witnessed a hit and run on September 22, 2022.

The adolescence, all members of the midwest girls’ soccer team, we’re participating in a pre-season scrimmage, when loud crash interrupted there game.

“I turned and saw a car hitting another car, and then the first car took off that way,” said Team captain Jessica Sunflower.

Police arrived at the scene only 2 minutes after one of the children called nine-one-one.

Farther down the road to the Northwest, another car was sideswiped, police said.

“It may very well be the same driver,” Andrew McMuffin, a police detective, hypothesized.

The team, back on the field after covid-19 protocols kept them a part for 2 years, opens their Fall season with a home game this Friday.

“Hopefully we don’t have anymore distractions so we can get ready for the game,” Sunflower said.

Keep working on your story!
Read it over before you turn it in.
Make it shine!