Running from Cannibals in “the Forest”

What could have been a peaceful wilderness vacation, became a nightmare almost immediately — Moments after I appeared in a passenger plane, the mother-of-all turbulent aviation events brought us crashing to the ground. Soon I awoke without any major brain injury or broken limbs, and I watched helpless as a man painted head-to-toe in red walks off the plane, carrying someone else’s child.

Who? Why? Where the heck are we? None of that matters, because I’m now wandering a dense forest, teeming with wildlife, on what appears to be an island? I thought uninhabited at first … until I ran into totems made of human skin.

Thank goodness, though! Perhaps whoever made these can help me get back to the real world?

I’m eating unidentified berries and mushrooms to survive. Not safe, but look, I made an executive digestive decision. Wandering through trees, and hugging the coastline for any signs of civilization. Just abandoned huts, and more totems. Where did they get all the human skin? I’m careful to document all of these as they may be historically and culturally significant.

Heading back inland I’ve found a hole. Not just any hole — this mammoth crater is rather suspicious. My fear of heights kicks in, coupled with the PTSD I clearly have from having recently fallen out of the sky in flimsy metal tube … I step away from the ledge slowly.

A cave! And a rope! I’m going in. Signs of life lead the way.

And now I’m being chased by cannibals. I had just enough time to photograph my assailants before they bludgeoned me unconscious. I just hope they don’t damage my camera… 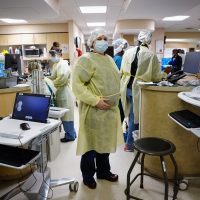